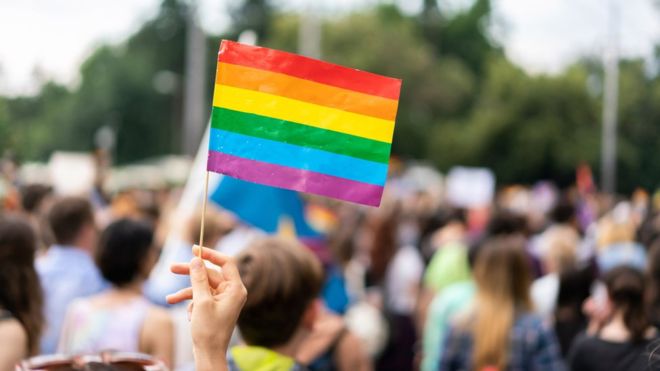 No single gene associated with being gay

A genetic analysis of almost half a million people has concluded there is no single "gay gene".

The study, published in Science, used data from the UK Biobank and 23andMe, and found some genetic variants associated with same-sex relationships.

But genetic factors accounted for, at most, 25% of same-sex behaviour.

Advocacy group GLAAD said the study confirmed "no conclusive degree to which nature or nurture influenced how a gay or lesbian person behaves."

The researchers scanned the genomes - the entire genetic make-up - of 409,000 people signed up to the UK Biobank project, and 68,500 registered with the genetics company 23andMe.

Participants were also asked whether they had same-sex partners exclusively, or as well as opposite-sex partners.

The Harvard and MIT researchers concluded genetics could account for between 8-25% of same-sex behaviour across the population, when the whole genome is considered.

Five specific genetic variants were found to be particularly associated with same-sex behaviour, including one linked to the biological pathway for smell, and others to those for sex hormones.

But together they only accounted for under 1% of same-sex behaviour.