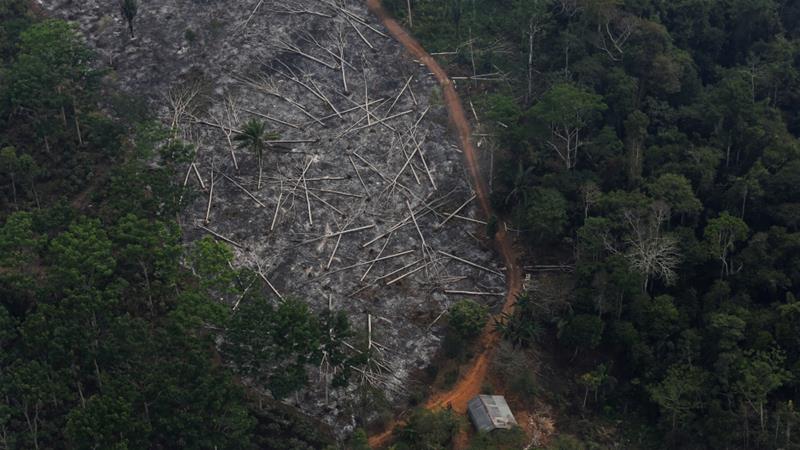 Brazilian President Jair Bolsonaro has reacted angrily to a decision by Norway to stop funding projects to curb deforestation in Brazil after its right-wing government blocked operations of a fund receiving the aid.

"Isn’t Norway that country that kills whales up there in the North Pole?" he told reporters after Norway said it would halt the payment of about $33m. "Take that money and help Angela Merkel reforest Germany."

Germany has suspended 35m euros ($39m) in the funding of new Ministry of Environment projects aimed at Amazon preservation in Brazil, due to concerns over the increasing deforestation.

For more than a decade, Norway has worked closely with Brazil to protect the Amazon rainforest, donating more than $1.2bn into the Amazon Fund, to which it is by far the biggest donor.

However, following changes by Bolsonaro's government that changed the fund’s governance structure and closed down the steering committee that selects the projects to back, Norway decided to halt its funding.

Norway's Minister of Climate and Environment Ola Elvestuen confirmed to local media the funding had been stopped because Brazil broke its agreement with Norway and Germany by closing down the board of the Amazon Fund and its technical committee.

So far, no formal proposal for the composition of a new committee has been made.

Brazil is home to 60 per cent of the Amazon, which is the world's largest tropical rainforest and is seen as vital to the global fight against climate change.

Since the start of Bolsonaro's term last year, deforestation in Brazil’s Amazon has surged, with no plans to slow it down in coming years.

In June and July this year, deforestation soared compared to previous years.

Following the release of that data, head of Brazil's National Institute for Space Research (INPE) had to leave his position citing an "unsustainable" situation.

Bolsonaro, whose term started at the beginning of 2019 after he rose to power on a right-wing populist platform, has repeatedly voiced scepticism over the deforestation rate in the Amazon and called the data into question.

He has also suggested opening the world's largest tropical rainforest to mining, farming and dam building.

Environmentalists have warned that Bolsonaro's strong remarks calling for the opening up of the Amazon for development and criticising the country's environmental enforcement agency, Ibama, for handing out too many fines would embolden loggers and ranchers seeking to profit from deforestation.