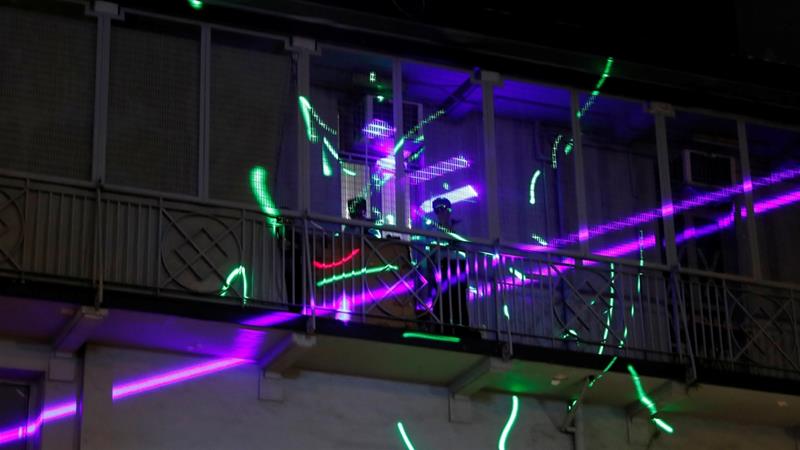 Laser beams Employed As a Weapon in Hong Kong protests

Technology has become a crucial element in the Hong Kong protests, from facial recognition system to online trolling.

With thousands taking part in Hong Kong's pro-democracy protests, technology has come to play an important role in the demonstrations.

Authorities have been using technology to their advantage, prompting the protesters to counter that with moves of their own.

Al Jazeera looks at three examples of how the use of technology, from mobile phones to facial recognition, has become a crucial element in the ongoing protests in Hong Kong.

During the early days of the protests, a video showing dozens of laser pointers aimed at the police went viral.

The protesters were using the laser pointers to not only disorientate the police, but also to circumvent China's mass surveillance systems, particularly the facial recognition systems.

Beijing's facial recognition capabilities first came to global attention when China's detention of more than one million Uighurs in its western Xinjiang province made headlines.

Among other things, China's use of facial recognition software enabled it to have a tight control over the Uighur population.

The police have warned the protesters against using these types of lasers, saying that they could blind the officers.

'Hong Kong is not safe any more': Millions affected by crisis

However, the protesters have not stopped using them despite those calls.

Other more low-tech solutions by the protesters have been covering their faces with masks and using umbrellas to prevent the cameras from filming and identifying them.

The scuffles have been taking place on the streets of Hong Kong. But the mood has been echoed online, especially on Twitter which has been used extensively by followers of both sides.

Twitter has been the means of getting the word out to the world for many protesters, ensuring their voices are heard by an international audience.

However, as the protests progressed, a steady stream of pro-China accounts slowly emerged, with thousands echoing talking points in support of Beijing.

The accounts, which often have a combination of the randomly generated set of letters as user names, had been dormant for years. But now, with protests in Hong Kong gaining significant traction on Twitter, these accounts have come alive.

Often, they will only have a couple of tweets, hardly any followers and follow only a few accounts. But these accounts are sending out messages in favour of the Chinese government.

According to research done by Al Jazeera for previous articles about state-backed propaganda on Twitter, these are all common traits for Twitter bots and trolls.