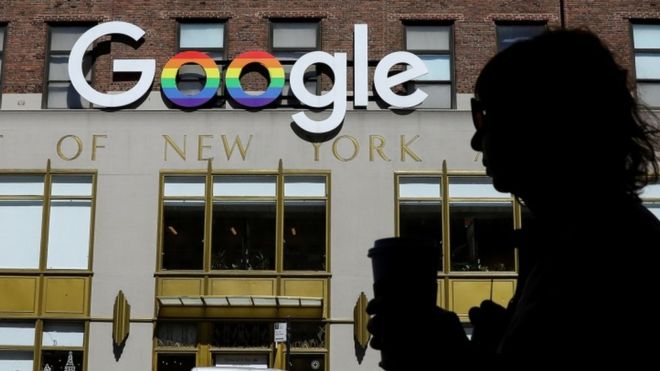 US launches inquiry into French plan to tax tech giants

US President Donald Trump has ordered an investigation into France's planned tax on tech giants - a move that could result in retaliatory tariffs. His trade representative said the US was "very concerned" that the tax "unfairly targets American companies". On Thursday the French parliament is due to approve a 3% levy on revenue made by such companies as Google and Facebook inside the country.

Tech giants are able to locate their headquarters in low-tax countries where they declare most of their profits, thereby minimising their tax bill. The new tax is expected to raise about €400m ($450m; £360m) this year.

Any digital company with revenue of more than €750m - of which at least €25m is generated in France - would be subject to the tax.

What has the US said?

"[Mr Trump] has directed that we investigate the effects of this legislation and determine whether it is discriminatory or unreasonable and burdens or restricts United States commerce," the statement from trade representative Robert Lighthizer said.

The US inquiry could pave the way for punitive tariffs, which Mr Trump has imposed on several occasions since taking office.

The latest inquiry was welcomed by Republican Senate Finance Committee Chairman Chuck Grassley and Senator Ron Wyden, the senior Democrat on the panel.

"The digital services tax that France and other European countries are pursuing is clearly protectionist and unfairly targets American companies in a way that will cost US jobs and harm American workers," they said in a joint statement.

This "Section 301" investigation, as it is known, has been used before as a way of eventually implementing new tariffs on countries the Trump administration feels is taking the US for a ride.

If France is going to take hundreds of millions of euros from the pockets of American tech giants, the US argument might be, then why shouldn't the US earn more money from what the French do in the US? It took the same view with China and has buried itself in a trade war that has destabilised relations and has the potential to escalate even further.

The digital tax is a risk for France, for it is now isolated. There had been talk of a Europe-wide tech tax, but talks fell down thanks in part to opposition from countries such as Ireland, which has benefitted from being able to attract tech firms to set up their European base in the country. Other countries - such as the UK, Spain and Austria - are considering similar moves, but France is furthest along.

One thing all sides agree on, however, is that in our modern, digital economy, the overhaul of how companies are taxed is long overdue.

France will be hoping for one of two outcomes. Either countries follow their lead and implement their own, independent laws, limiting France's exposure. Or the move gives added energy to calls for a multilateral agreement on how digital firms should be taxed globally, putting an end to the squirreling-away of vast sums of money made by internet giants.

The technology industry lobby group ITI welcomed the investigation but cautioned against tariffs.

"We support the US government's efforts to investigate these complex trade issues but urge it to pursue the 301 investigation in a spirit of international co-operation and without using tariffs as a remedy," said Jennifer McCloskey, vice-president of policy.

What has France said?

The French government has argued that companies should not be able to escape paying tax if their headquarters are based elsewhere.

It announced its own tax on big technology firms last year after EU-wide efforts stalled.

The French initiative is a response to a growing public feeling that countries are losing out on billions in taxes because of the intangible and extra-territorial nature of the digital economy, BBC Paris Correspondent Hugh Schofield says.

Around 30 - mostly American companies - will pay the tax. Chinese, German, Spanish and British firms will also be affected.

Countries including France and the UK have accused firms of routing some profits through low-tax EU member states such as Ireland and Luxembourg.

The big US tech companies have argued they are complying with national and international tax laws.