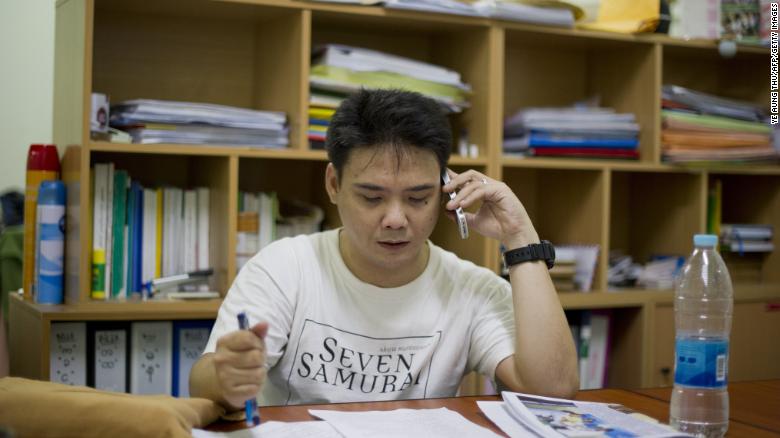 Veteran democracy activist Kyaw Min Yu, better known as Ko Jimmy, and former National League for Democracy lawmaker Phyo Zayar Thaw were executed, along with Hla Myo Aung and Aung Thura Zaw, the Global New Light of Myanmar reported, without giving a date.
Their deaths mark the first judicial executions in the country in decades, and human rights groups fear more will follow. According to Human Rights Watch, 114 people have been sentenced to death in Myanmar since the military seized power in a coup in February 2021.

'We'll never back down': Myanmar's coup, one year later 11:13
Ko Jimmy and Phyo Zayar Thaw were accused by the military of being "involved in terrorist acts such as explosion attacks, killing of civilians as informants," junta spokesperson Zaw Min Tun previously told CNN. They were sentenced to death in January 2022, and last month Zaw Min Tun confirmed their appeals had been denied.
Civilian cases have been tried in military courts with proceedings closed to the public since the military seized power last year, ousting the elected government and reversing almost a decade of tentative democratic reforms.
Rights groups say these secretive military tribunals deny the chance to a fair trial and are designed for speedy -- and almost certain -- convictions, regardless of evidence.
United Nations Special Rapporteur on the situation of human rights in Myanmar, Tom Andrews, said in a statement Monday he was "outraged and devastated" by the executions.
"My heart goes out to their families, friends and loved ones and indeed all the people of Myanmar who are victims of the junta's escalating atrocities," he said. "These individuals were tried, convicted, and sentenced by a military tribunal without the right of appeal and reportedly without legal counsel, in violation of international human rights law."
Acting Asia director for Human Rights Watch, Elaine Pearson, called the executions "an act of utter cruelty," that "followed grossly unjust and politically motivated military trials."
"This horrific news was compounded by the junta's failure to notify the men's families, who learned about the executions through the junta's media reports," Pearson said in a statement Monday.
A spokesperson for United Nations Secretary-General António Guterres said earlier the UN was "deeply troubled" by the decision to execute the men, calling it a "blatant violation of the right to life, liberty and security of person," referring to an article in the Universal Declaration of Human Rights.
Amnesty International said it has recorded an "alarming" increase in the number of death sentences in the country since the takeover that it said were designed to "sow fear."
Whatsapp
Leave your feedback!