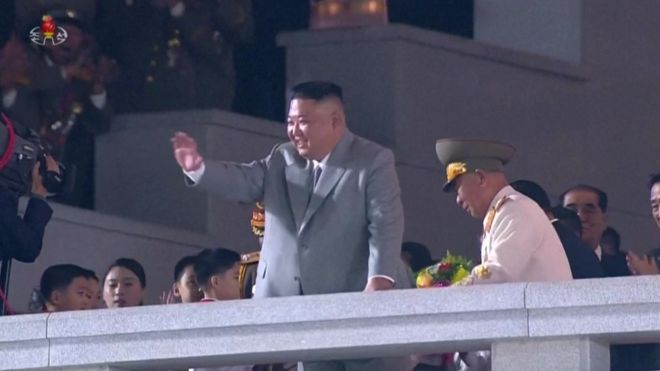 The parade marked the 75th anniversary of the Worker's Party.

It is the country's first parade in two years and comes just weeks ahead of the US presidential election.

North Korea had not featured ballistic missiles in its parades since President Donald Trump and Mr Kim held their first summit in 2018.

According to South Korea's military, the parade was held before dawn on Saturday. It is not yet known why the event was held so early.

No foreign media or foreigners were allowed at the event, so analysts are relying on edited state-media footage which is being released to assess the parade.

In a speech, he said the country would continue to "strengthen" its military for "self-defence and deterrence".

He also said he was grateful that no North Koreans have contracted Covid-19.

"I wish good health to all the people around the world who are fighting the ills of this evil virus," he said.

Despite claiming the country has no cases of coronavirus, Mr Kim continues to hold high-level meetings to ensure tight restrictions remain in place.

Analysts have said it is highly unlikely that North Korea has not experienced any coronavirus cases at all.

There was no sign of anyone wearing masks during the parade. However there were far fewer people involved in the event than usual, AFP news agency reports.

North Korea closed its borders to the outside world in January to prevent an outbreak of Covid-19 spreading from neighbouring China.