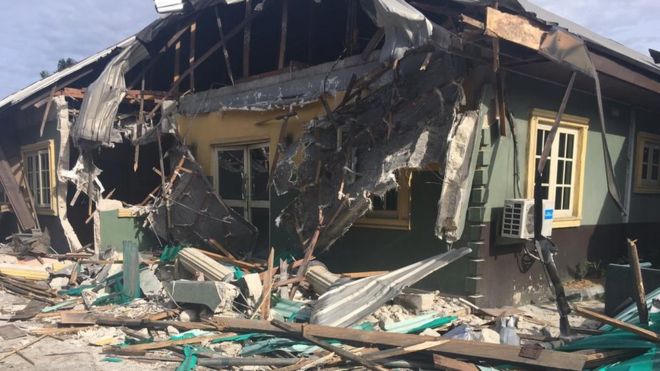 The authorities in Nigeria's oil-rich southern Rivers state have demolished two hotels over an alleged breach of lockdown rules intended to contain the spread of coronavirus.

State Governor Nyesom Wike, who supervised the tearing down of Edemete Hotel and Prodest Home on Sunday, said the operators had flouted an order that hotels should be closed.

He said that people who had tested positive for the virus had been found in hotels across the state. But he did not say if anyone who had Covid-19 had been staying in either of the demolished hotels.

'We refused to pay bribe'

The managers of both businesses have been arrested, but the owner of Prodest Home has denied that his hotel was open.

"The hotel was not operating and 70% of the staff had been sent away," Gogorobari Promise Needam told the BBC.

"There were only three people on ground.

"[Officials] came in and were asking for bribe, they said they would let us operate if we gave them money but we said we were not operational so had no money to give," he said.

Details
By Salt Media
May.12