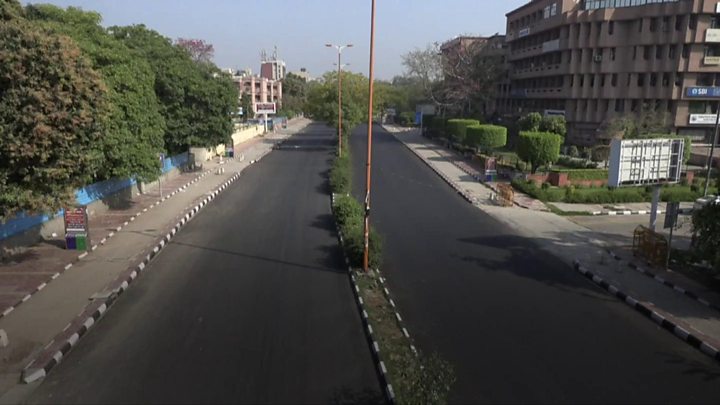 More than a billion people in India have been asked to observe a 14-hour long curfew to try to combat the coronavirus pandemic.

Prime Minister Narendra Modi announced the curfew last week, telling citizens that it would be a test in order to assess the county's ability to fight the virus.

India has so far recorded 315 cases.

Mr Modi told his followers on Twitter: "Let us all be a part of this curfew, which will add tremendous strength to the fight against Covid-19 menace. The steps we take now will help in the times to come."

Transport across the country has been affected by the curfew, according to NDTV. No long-distance or suburban trains are running; however, those already running before the curfew will not be stopped.

In Delhi, all shops were closed apart from those selling essentials, and pharmacies. Religious places cancelled activities as part of the curfew.

Mr Modi has asked people at 17:00 on Sunday to stand at balconies or near windows and clap or ring bells to show their appreciation for medical professionals and sanitation workers.

Some parts of India have already enforced shutdowns.

Rajasthan ordered a shutdown until 31 March. Four cities in the state of Gujarat have introduced similar measures until 25 March.

India has barred entry to everyone, including citizens, flying from certain countries, including the UK and most European nations. It has also cancelled most entry visas for people flying in from other countries.

Popular Indian monuments - such as the 16th Century Red Fort in Delhi - have been shut to visitors to prevent large gatherings.

The Taj Mahal, the country's most iconic monument, closed its doors on Tuesday, along with more than 140 other monuments and museums.