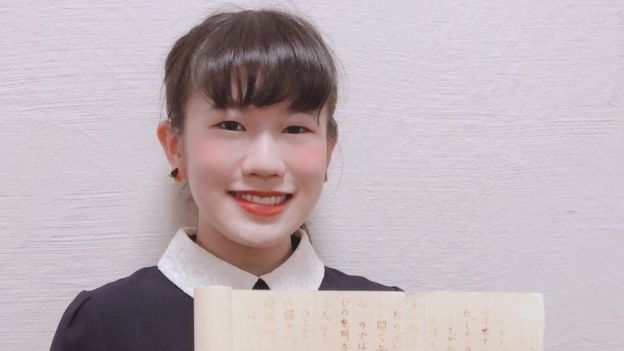 A Japanese student of ninja history who handed in a blank paper was given top marks - after her professor realised the essay was written in invisible ink.

The words appeared when her professor heated the paper over his gas stove.

"It is something I learned through a book when I was little," Ms Haga told the BBC. "I just hoped that no-one would come up with the same idea."

Ms Haga has been interested in ninjas - covert agents and assassins in medieval Japan - since watching an animated TV show as a child.

After enrolling at Mie University in Japan, the first-year student took a class in ninja history and was asked to write about a visit to the Ninja Museum of Igaryu.

"When the professor said in class that he would give a high mark for creativity, I decided that I would make my essay stand out from others," she said.

"I gave a thought for a while, and hit upon the idea of aburidashi."

Ms Haga, 19, soaked soybeans overnight, then crushed them before squeezing them in a cloth.

She then mixed the soybean extract with water - spending two hours to get the concentration right - before writing her essay with a fine brush on "washi" (thin Japanese paper).

Once her words had dried, they became invisible. But, to ensure her professor didn't put the essay in the bin, she left a note in normal ink saying "heat the paper".

The professor, Yuji Yamada, told the BBC he was "surprised" when he saw the essay.

"I had seen such reports written in code, but never seen one done in aburidashi," he said.

"To tell the truth, I had a little doubt that the words would come out clearly. But when I actually heated the paper over the gas stove in my house, the words appeared very clearly and I thought 'Well done!'

"I didn't hesitate to give the report full marks - even though I didn't read it to the very end because I thought I should leave some part of the paper unheated, in case the media would somehow find this and take a picture."

As for the essay itself, Ms Haga said it had more style than substance.

"I was confident that the professor would at least recognise my efforts to make a creative essay," she said.

"So I wasn't really worried about getting a bad score for my essay - though the content itself was nothing special."