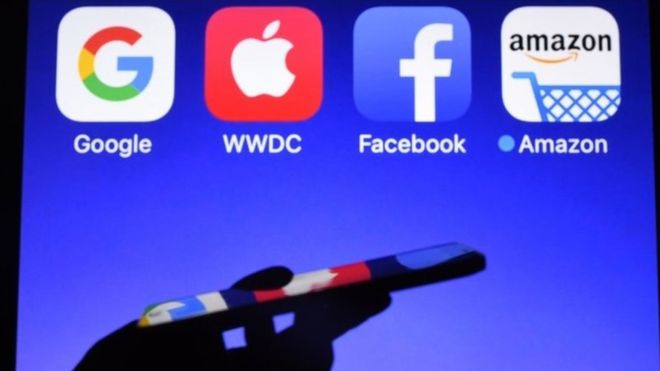 Technology giants' power to be probed in US

The US Justice Department has announced an investigation into leading online platforms, examining whether they are unfairly restricting competition.

The DoJ did not name any firms, but companies such as Facebook, Google, Amazon and Apple are likely to be scrutinised in the wide-ranging probe.

It was sparked by "widespread concerns" about "search, social media, and some retail services online," the DoJ said.

It marks the latest scrutiny of tech firms' power over the US economy.

The US Federal Trade Commission is already looking into similar concerns, while there are also investigations taking place in the European Union.

Last month, the Justice Department was reported to be preparing an investigation of Google to determine whether the search engine giant had broken anti-trust law.

The US Department of Justice said its anti-trust review would consider "whether and how market-leading online platforms have achieved market power and are engaging in practices that have reduced competition, stifled innovation or otherwise harmed consumers".

It is likely to examine issues including how the largest tech firms have grown in size and power, and expanded into additional businesses, as well as how they have used the powers that come with having very large networks of users.

"Without the discipline of meaningful market-based competition, digital platforms may act in ways that are not responsive to consumer demands," Assistant Attorney General Makan Delrahim, who heads the Antitrust Division, said in a statement.