Amazon wants you to pay with a wave of your hand

Amazon's latest effort to speed up shopping trips lets you pay with the palm of your hand at some of its stores.

On Tuesday, the company introduced Amazon One, which connects your palm print to a stored credit card so you can place your hand above a sensor to enter and buy items at checkout-free Amazon (AMZN) Go stores. (Typically, visitors use a code on their smartphone to open electronic gates inside these stores.)
Initially, the feature will be available at two Amazon Go stores in Seattle, and the company plans in upcoming months to add it to more Amazon Go stores, which are spread across Seattle, San Francisco, New York, and Chicago. Amazon plans to bring it to other retailers — and perhaps places like offices and stadiums — in the future.
Dilip Kumar, Amazon's vice president of physical retail and technology, told CNN Business that Amazon One had been in the works since long before the pandemic. But the timing could be a positive for Amazon: Customers may find such contact-free entry and payment technology convenient, and businesses, which are increasingly looking to technological solutions to navigate the pandemic, may also find it appealing.
Yet the idea of handing over biometric data to one of the largest retailers in the United States could raise eyebrows, too. Amazon has previously come under fire from privacy advocates who are concerned about its facial-recognition software. Amazon said in June that it would temporarily stop selling its Rekognition software to police. When it comes to Amazon One data, Kumar said the company isn't storing any information locally on entry scanners at stores. All palm images are encrypted and Amazon stores them online.
The company purposely chose palm recognition rather than another biometric because it can be very accurately matched, and a customer has to make an intentional gesture to use it, he said.
"I encourage people to try it, see how they like the experience, and then go from there," Kumar said.
Amazon One — which is not to be confused with the company's first airplane, also called Amazon One — is the latest offering in a decades-long effort to make shopping faster and more convenient. Its arrival had been anticipated.
Before trying it, users must insert a credit card in an Amazon One device and hold a palm above it, facing down, so it can be scanned. In an effort to make the system as accurate as possible, Kumar said, a camera takes multiple images of the fine lines and ridges of the palm, and captures some subcutaneous details, such as veins, that aren't as visible in typical photographs. 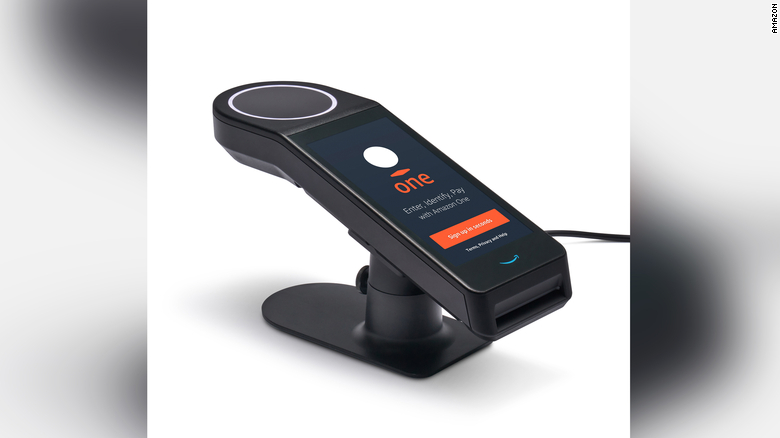 After enrollment, a user holds their palm above an Amazon One scanner to enter the store. Then, anything they take will be automatically charged to the credit card connected to their palm. Users should be able to use the same palm to enter and shop at multiple stores, Kumar said. At first, users will be able to link one credit card to either or both palms; eventually, Kumar said, there may be an option to assign one credit card to each palm.
Amazon One is currently available at two of the Amazon Go stores in Seattle, at 7th Avenue and Blanchard Street, and in the South Lake Union neighborhood. Amazon is not yet saying when it will be available at other retailers, nor how much it will charge other businesses to use the technology.
SOURCE: CNN
Tweet
Whatsapp
Leave your feedback!