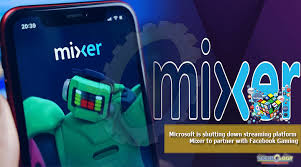 Microsoft is shutting down its video game streaming platform, Mixer, after its growth failed to meet the company's expectations.

The company said Monday it is partnering with Facebook (FB) to transition the Mixer streaming community to Facebook Gaming. The deal brings together two big names in the gaming world in a partnership that could challenge industry leader, Amazon's (AMZN) Twitch.
"The success of Partners and streamers on Mixer is dependent on our ability to scale the platform for them as quickly and broadly as possible," Mixer said in a blog post Monday. "It became clear that the time needed to grow our own livestreaming community to scale was out of measure with the vision and experiences that Microsoft and Xbox want to deliver for gamers now, so we've decided to close the operations side of Mixer and help the community transition to a new platform."
The companies declined to say how much the deal is worth. Facebook spokesperson Drew Symonds noted that it is a partnership "not a merger or an acquisition." The spokesperson added that Facebook Gaming will assume the rights to the Mixer trademarks and associated domain names, but Microsoft will retain the intellectual property rights to the Mixer technology.
Mixer co-founder Matt Salsamendi, who left the company last year, told CNN Business last week that he will not see any money from the deal.
Mixer, once called Beam, had largely flown under the radar since it was acquired by Microsoft in 2016. But last year, the platform gained attention when Fortnite star Ninja made the jump from Twitch to exclusively streaming on Mixer.
Microsoft also had a leg up on Amazon thanks to its broad reach in the gaming ecosystem, which includes Xbox consoles, game developers and cloud streaming. Still, Twitch and other rival platforms such as Google's (GOOGL) YouTube presented significant competition.
Mixer was downloaded around 3.4 million times by first-time users across the App Store and Google Play globally since the beginning of this year, a 23% decrease from the same period in the year prior, according to estimates from mobile app research firm Sensor Tower.
Microsoft said the deal is part of a broader effort from Xbox and Facebook to bring "new experiences and opportunities" to Facebook Gaming's more than 700 million monthly users.
Starting on July 22, all Mixer sites and apps will redirect users to Facebook Gaming, the company said. It added that Mixer Partners — Mixer streamers who are able to monetize their content and enjoy perks such as priority support on the platform — will also be granted partner status with Facebook gaming, and the new platform will "honor and match all existing partner agreements as closely as possible."
However, whether or not Mixer Partners ultimately transition to Facebook Gaming is "completely optional," according to Facebook's Symonds. This makes it yet unclear whether the platform will be able to benefit from Mixer's high-profile Partners.
SOURCE: CNN
Tweet
Whatsapp
Leave your feedback!