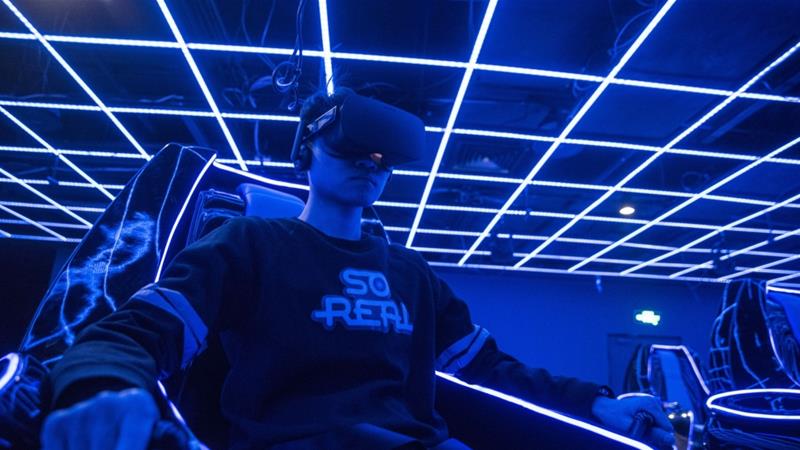 Beijing is accelerating its bid for global leadership in key technologies, planning to pump more than a trillion dollars into the economy through the rollout of everything from wireless networks to artificial intelligence.

In the masterplan backed by President Xi Jinping himself, China will invest an estimated $1.4 trillion over six years to 2025, calling on urban governments and private tech giants like Huawei Technologies Co. to lay fifth generation wireless networks, install cameras and sensors, and develop AI software that will underpin autonomous driving to automated factories and mass surveillance.

The new infrastructure initiative is expected to drive mainly local giants from Alibaba and Huawei to SenseTime Group Ltd. at the expense of U.S. companies. As tech nationalism mounts, the investment drive will reduce China's dependence on foreign technology, echoing objectives set forth previously in the Made in China 2025 program. Such initiatives have already drawn fierce criticism from the Trump administration, resulting in moves to block the rise of Chinese tech companies such as Huawei.

"Nothing like this has happened before, this is China's gambit to win the global tech race," said Digital China Holdings Chief Operating Officer Maria Kwok, as she sat in a Hong Kong office surrounded by facial recognition cameras and sensors. "Starting this year, we are really beginning to see the money flow through."

The tech investment push is part of a fiscal package waiting to be signed off by China's legislature, which convenes this week. The government is expected to announce infrastructure funding of as much as $563 billion this year, against the backdrop of the country's worst economic performance since the Mao era.

The nation's biggest purveyors of cloud computing and data analysis Alibaba Group Holding Ltd. and Tencent Holdings Ltd. will be linchpins of the upcoming endeavor. China has already entrusted Huawei to galvanize 5G. Tech leaders including Pony Ma and Jack Ma are espousing the program.

Maria Kwok's company is a government-backed systems integration provider, among many that are jumping at the chance. In the southern city of Guangzhou, Digital China is bringing half a million units of project housing online, including a complex three quarters the size of Central Park. To find a home, a user just has to log on to an app, scan their face and verify their identity. Leases can be signed digitally via smartphone and the renting authority is automatically flagged if a tenant's payment is late.

China is no stranger to far-reaching plans with massive price tags that appear to achieve little. There's no guarantee this program will deliver the economic rejuvenation its proponents promise. Unlike previous efforts to resuscitate the economy with "dumb" bridges and highways, this newly laid digital infrastructure will help national champions develop cutting-edge technologies.

China isn't alone in pumping money into the tech sector as a way to get out of the post-virus economic slump. Earlier this month, South Korea said AI and wireless communications would be at the core of it its "New Deal" to create jobs and boost growth.

According to the government-backed China Center for Information Industry Development, the 10 trillion yuan ($1.4 trillion) that China is estimated to spend from now until 2025 encompasses areas typically considered leading edge such as AI and IoT as well as items such as ultra-high voltage lines and high-speed rail. More than 20 of mainland China's 31 provinces and regions have announced projects totaling over 1 trillion yuan with active participation from private capital, a state-backed newspaper reported Wednesday.

Separate estimates by Morgan Stanley put new infrastructure at around $180 billion each year for the next 11 years -- or $1.98 trillion in total. Those calculations also include power and rail lines. That annual figure would be almost double the past three-year average, the investment bank said in a March report that listed key stock beneficiaries including companies such as China Tower Corp., Alibaba, GDS Holdings, Quanta Computer Inc. and Advantech Co. 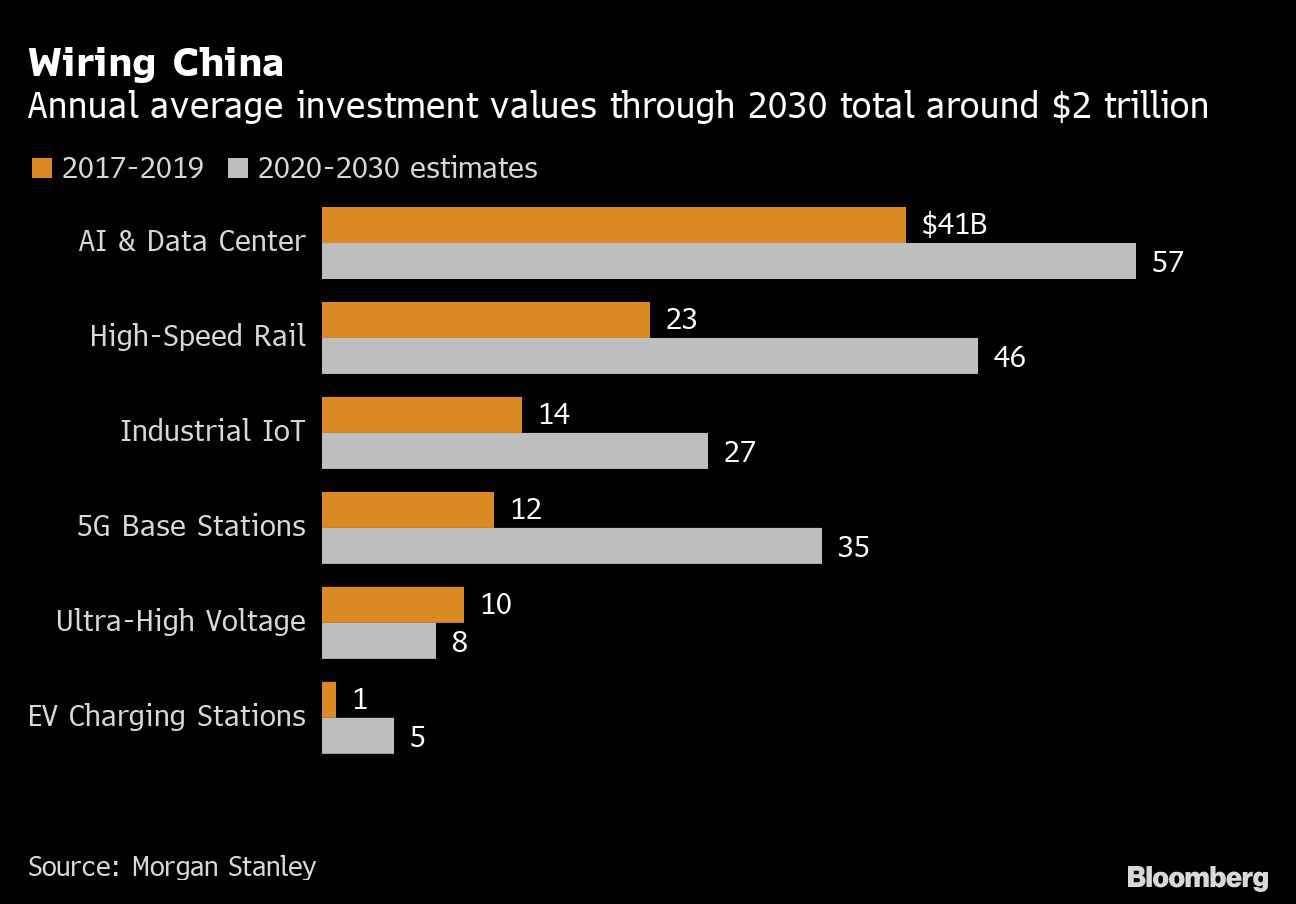 Beijing's half-formed vision is already stirring a plethora of stocks, a big reason why five of China's 10 best-performing stocks this year are tech plays like networking gear maker Dawning Information Industry Co. and Apple supplier GoerTek Inc. The bare outlines of the masterplan were enough to drive pundits toward everything from satellite operators to broadband providers.

It's unlikely that U.S companies will benefit much from the tech-led stimulus and in some cases they stand to lose existing business. Earlier this year when the country's largest telecom carrier China Mobile awarded contracts for 37 billion yuan in 5G base stations, the lion's share went to Huawei and other Chinese companies. Sweden's Ericsson got only a little over 10% of the business in the first four months. In one of its projects, Digital China will help the northeastern city of Changchun swap out American cloud computing staples IBM, Oracle and EMC with home-grown technology.

It's in data centers that a considerable chunk of the new infrastructure development will take place. Over 20 provinces have launched policies to support enterprises utilizing cloud computing services, according to a March note from UBS Group AG. Tony Yu, chief executive officer of Chinese server maker H3C, that his company was seeing a significant increase in demand for data center services from some of the country's top internet companies. "Rapid growth in up-and-coming sectors will bring a new force to China's economy after the pandemic passes," he told Bloomberg News.

From there, more investment should flow. Bain Capital-backed data center operator Chindata Group estimated that for every one dollar spent on data centers another $5 to $10 in investment in related sectors would take place, including in networking, power grid and advanced equipment manufacturing. "A whole host of supply-chain companies will benefit," the company said in a statement.

There's concern about whether this long-term strategy provides much in the way of stimulus now, and where the money will come from. "It's impossible to prop up China's economy with new infrastructure alone," said Zhu Tian, professor of economics at China Europe International Business School in Shanghai. "If you are worried about the government's added debt levels and their debt servicing abilities right now, of course you wouldn't do it. But it's a necessary thing to do at a time of crisis."

Digital China is confident that follow-up projects from its housing initiative in Guangzhou could generate 30 million yuan in revenue for the company. It's also hoping to replicate those efforts with local governments in the northeastern province of Jilin, where it has 3.3 billion yuan worth of projects approved. These include building a so-called city brain that will for the first time connect databases including traffic, schools and civil matters such as marriage registry. "The concept of smart cities has been touted for years but now we are finally seeing the investment," said Kwok.