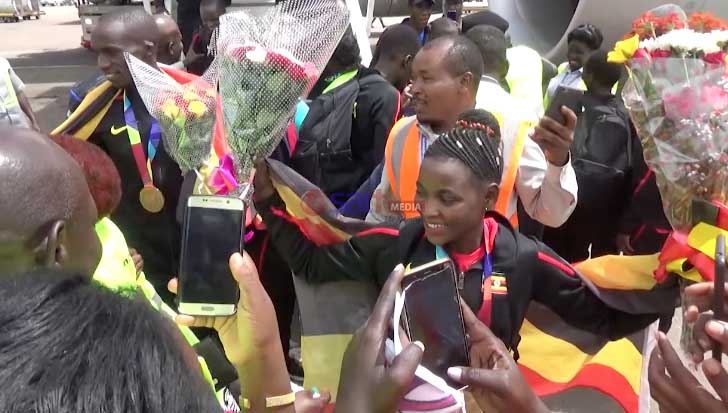 At exactly 1:29 pm the Qatar airways plane carrying Uganda’ heroes landed at Entebbe airport where parents of the athletes, national council of sports and the Uganda athletes federation officials were waiting for them.

The Entebbe airport was filled with joy and excitement as the airport staff joined families and sports officials to celebrate the athletes’ victorious return. The athletes held a press conference at the airport lounge. In her address Halima Nakaayi who won a gold medal in the 800-meter race dedicated the medal to all Ugandan women and admonished them that any of them can make it if they choose to give up. She further assured the people from central Uganda that they too can participate in such competitions and merge victorious.

In the same way, Joshua Cheptegei who won a gold medal yesterday recounted that he almost gave up but he was able to win because he chose to keep going.

Nakaayi’s mother who resembles the daughter in appearance said that she was overjoyed in a way she has never been before.

Eventually, the athletes left the airport and headed to hotel Africana for a special dinner, and the president is expected to host them tomorrow at the statehouse. Uganda merged 7th in the competition with 7 medals of which 2 gold medals and this is the first time for Uganda to win 2 gold medal in this competition. The gold medallists also banked $60000 Ugx221 million each. Uganda was represented by a team of 22 athletes in total.