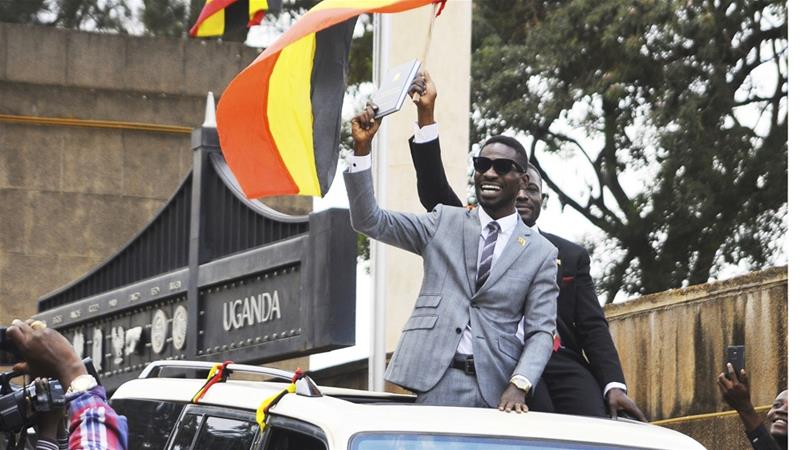 The 37-year-old opposition leader says he will challenge longtime President Yoweri Museveni 'on behalf of the people'.

Uganda's pop star-turned-politician Bobi Wine has said he will challenge longtime President Yoweri Museveni in the elections expected to be held in 2021.

"I will challenge President Museveni on behalf of the people," the 37-year-old opposition leader said in an interview to the Associated Press news agency on Monday.

But Wine, whose real name is Kyagulanyi Ssentamu, said he was concerned about his safety after surviving what he believes was an attempt on his life last August when his driver was shot dead in his car following an incident in which protesters threw stones at the president's motorcade.

"I live every day as it comes, not being sure of the next day," he said at his home outside capital Kampala. "I am not blind to the fact that the regime wants me dead and wants me dead as soon as possible."

Wine said he is fearful because "there has never been a threat to this regime like the threat we pose to it today as a generation".

As the leader of a popular movement known as "People Power", Wine has captured the imagination of many who want to see the exit of Museveni, who has held power since 1986 and looks set to run for a new term.

Wine first came to prominence in 2017 when, as an independent candidate, he won the election as a legislator representing a constituency near Kampala.

He has since successfully campaigned for other opposition candidates, raising his profile as a national leader and attracting calls urging him to run for president.

But Wine faces multiple challenges, including limited opportunities to hold rallies or stage concerts ahead of elections. The police have violently foiled his most recent attempts to hold public events.

He also faces treason charges stemming from his alleged role in the incident in which the president's convoy was attacked with stones.

Prosecutors have since amended the charge sheet to include the alleged offence of annoying the president, in addition to a separate charge related to alleged disobedience of lawful orders. He denies all the charges.

Wine would be ineligible to run for president if he were to be convicted of any of those crimes.

"We know that the regime is going to try anything within their reach to block us from contesting," he said.