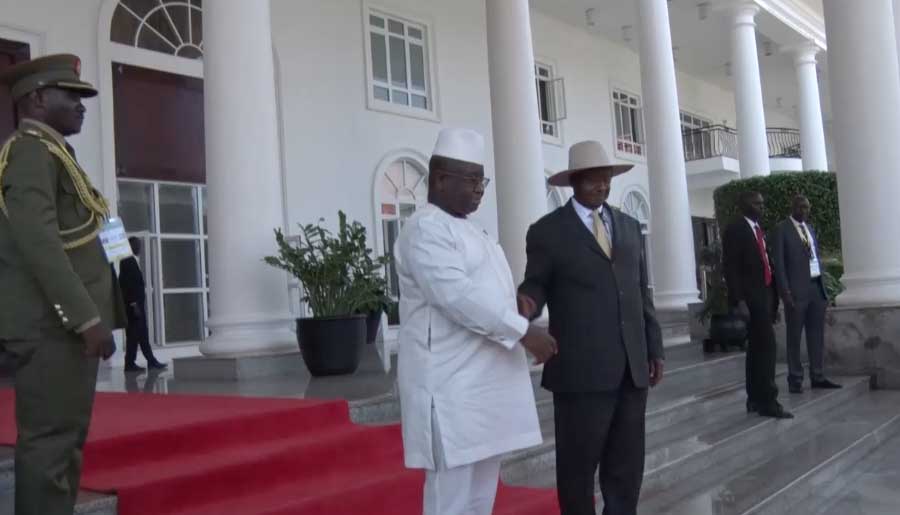 President Julius Maada arrived at statehouse at 11:30 where he was received by the president Yoweri Museveni. He later inspected the guard of honour mounted by soldiers of UPDF.

Upon arrival the duo was involved in a private meeting these signed an agreement on three areas of improving the image of both countries. Under this, they signed a memorandum of understanding which includes general political, cooperation flame work and waving of visa and the waiver of visas of diplomatic passports.

President Museveni vows to connect east African region to West Africa as a way of increasing income. The president cites the Panama Canal that was used to connect North and South America that boosted traded in America.

The president made the remarks as a function where he was welcoming the president of Sierra Leone His Excellency Julius Maada who is in the country for a three-day visit. While responding to question regarding the various ways of connecting Africa with other African countries, the president mentioned the standard gauge railway, which is going to connect east African countries and its neighbouring state.

While delivering his speech president Maada says the only way African countries can compete with the rest of the world in terms of trade is by adopting the latest technology by not accepting to be left behind.

President says Uganda’s future program of in industrialization depends on the locally produced steel. This is going to assist in providing raw materials.

The president while addressing a press conference after signing a memorandum of understanding with Sierra Leon said that currently, Uganda will be in a position to produce over 300 tonnes in its reserves which is going to boost our economy.

However, Sierra Leone president Julius Maada said that his country has suffered the most difficult situation that includes the outbreak of Ebola, war plus corruption which has affected the credibility of his country.

His excellence Maada will be touring quality chemical industry in Luzira among other areas from where he will be leaving the country on Wednesday.