These hippopotamus escaped from the national park in July last year and camped in stagnant flooded waters of river Nyamwamba in Kanyangeya cell.

According to the community conversation Warden Rwenzori mountain national parks, Alice Natukunda, it’s a great big loss to the Uganda wildlife authority as department and the country at large.

Natukund says that they acted so first after receiving the phone call from leaders but they couldn’t save the life of this hippopotamus because they found when residents had seriously injured it. 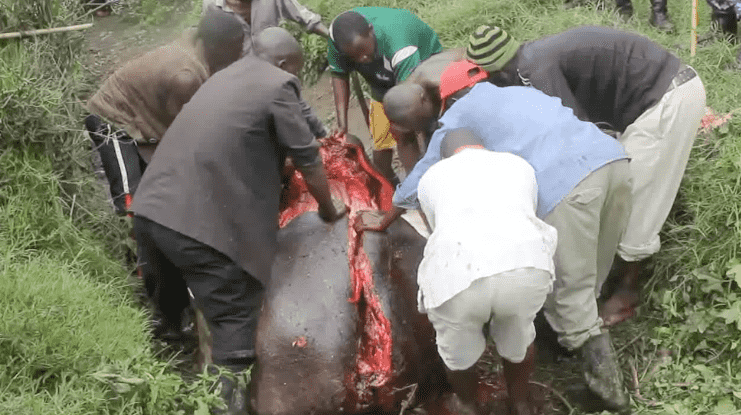 According to the residents of Saruti B, this hippopotamus raided their area at around 5am in the morning and destroyed two toilets and one kitchen.

They called upon the Uganda wildlife authority and the government at large to extend an electrical fence to their area to avoid such losses of wild animals.

The community conversation Warden Rwenzori mountain national parks said that they are aware that wild animals have been always disturbing the residents of Saruti B, and the intervention of electrical fences by UWA has resumed, adding that soon UWA will live in harmony with communities that neighbors the national parks.