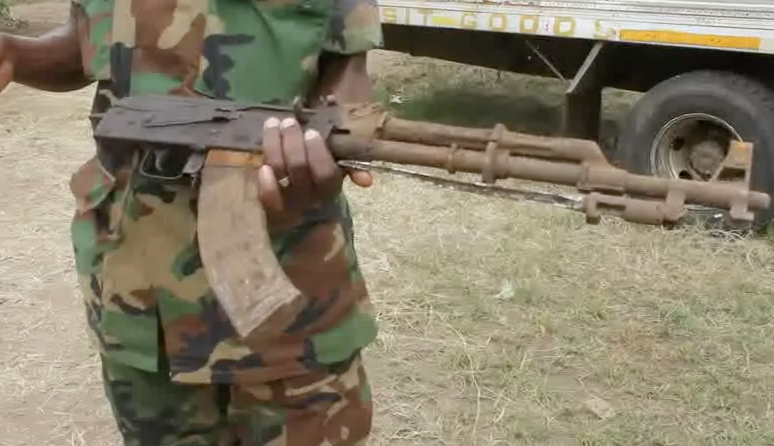 Locals in Ryamubuza village, Muhokya sub-county in Kasese district today discovered and handed over an AK47 rifle to the fisheries officer.

The rifle, which had two rounds in the magazine, was found lying in a gully in between gardens where these farmers were cultivating.

According to Sergeant John Beihumbiza the fisheries head of operations on Lakes Edward and George, it was on a call from a woman called Hadijah informing him about the discovery of a gun by her tenant and later he swung into action and discovered that the gun had two bullets inside the magazine.

He adds that the gun will be taken to the armory where the experts will find it to examine the number and perhaps the owner.

The gun is without doubt a property of Uganda basing on the reading, but its number is not clear which will call for more examination of the gun, John adds.

Moses Baguma one of the farmers but the first witness of this rifle narrates that he saw the gun when he had gone to piss in the nearby gully; he called his mates who later called the Lc1 chairperson.

“When I received a call from Hadijah my treasurer about the discovery of a gun, I told immediately informed the OC station Kikorongo police post, we went to the scene and found the gun”, Moses Kalisha the Lc1 chairperson Ryamubuza village said.