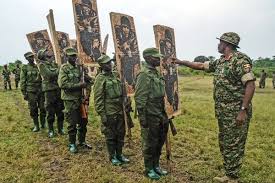 The NRM chairperson Mafabi Charles of Bubobi Sub County in Mbale district says some people stormed his area led by a one called Mustafa and started extorting money from the locals promising them entry to UPDF and police.

Over 20 victims whose money has been taken, including  Harriet Namataka, Wasike Deo, and LCI.II chairman of the sub-county Mukisa Nathan who paid Shs 3 million to Mustafa.

According to the chairman Mustafa and the group are using the NRM party name to collect the money by promising the locals that there are some gaps in the UPDF from the new entries who failed the training and took off and therefore the UPDF need those gaps to be filled up and that they only need 10 NRM people from each sub-county.

The chairman says that it’s not true saying that such people are just spoiling NRM party’s name because the recruitment was closed and there is nothing like filling gaps for those who were not taken for training camps.