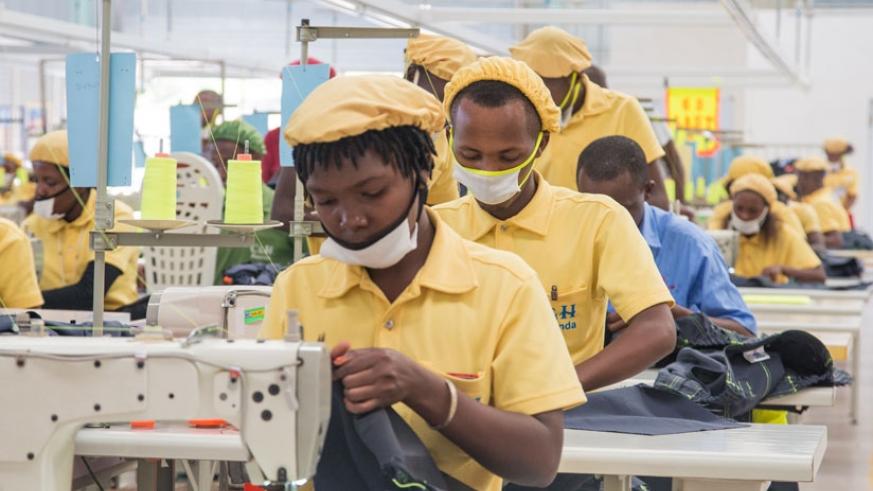 Rwanda's clothing spat with the US helps China

More than 100 sewing machines rattle away at a factory on the outskirts of Kigali, the capital of Rwanda.

A cooperative of 83 of the African nation's tailors established the company - the Kigali Garment Centre - last year.

Located in an industrial area built on one of the rolling green hills surrounding the city, it was set up in line with the Rwandan government's strategy of boosting the country's clothing manufacturing sector.

"We've trained 130 youngsters, of whom 97% are female, since the factory launched," says the firm's director general and co-founder Jerome Mugabo.

Behind him on the main factory floor, employees, who all seem to be in their teens or 20s, are producing chino trousers.

Rwanda's efforts to boost its domestic garment industry have seen it fight a lonely, and continuing, trade battle with the US that dates back to 2015.

Back then the six members of the East Africa Community (EAC) block of countries - Burundi, Kenya, Rwanda, South-Sudan, Tanzania, and Uganda - announced that they would all put in place high tariffs on the import of second-hand clothing or "chagua".

The idea behind the de-facto ban was to stop the importation of large quantities of cheap used clothing, mostly from the US and the UK, which the African nations said were stifling the growth of their nascent garment industries.

The study also found that almost two thirds of the combined populations purchased some second-hand clothes.

Keen to hang on to its share of these exports, the US responded that the proposed ban would violate free-trade agreements, and it threatened to remove the EAC countries from the African Growth and Opportunity Act (Agoa).

Enacted back in 2000, this allows 39 sub-Saharan African nations to export thousands of goods duty-free to the US.

After the US's announcement, all EAC members except for Rwanda backed out. It went on to introduce a tariff of $4 per kilogram on imports of used clothing in 2018. The US responded by putting tariffs of 30% on Rwandan clothing, where there had previously been none.