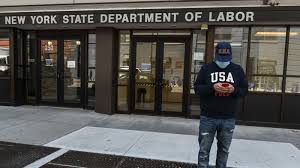 US economy loses a record 20.5 million jobs in April

The depth and breadth of the damage inflicted on the United States economy by coronavirus lockdown measures came into sharp, painful focus on Friday with government figures showing a record 20.5 million Americans lost their jobs in April.

Data from the US Bureau of Labor Statistics (BLS) also showed the unemployment rate skyrocketed to 14.7 percent  last month - the highest since the Great Depression.

Behind all of these numbers are real people whose livelihoods have been brutally and tragically disrupted by the pandemic.

The data further confirms the overwhelming consensus that the US economy is in the throes of a sharp recession. But in a sobering reality check, the headline numbers likely understate the true scale of the carnage.

"Although the unemployment rate only climbed to 14.7 percent, slightly below expectations, that was principally because the BLS is still having problems with misclassifying absent workers who should have been recorded as on temporary layoff," Capital Economics chief US economist Paul Ashworth wrote in a note to clients. "Without that distortion, the unemployment rate would have been close to 20 percent last month."

Though historic, the data came as no surprise. Some 33.5 million Americans filed for unemployment benefits in the seven weeks ending May 2, offering a preview of the monthly damage on tap.

But the April numbers do provide more details about which workers and which sectors of the economy were hardest hit by stay-at-home orders.

All of these groups with the exception of Black people posted record high unemployment rates.

Every major sector of the economy haemorrhaged jobs last month, but losses were particularly acute in leisure and hospitality where employment plummeted by 7.7 million, or 47 percent. Nearly three-quarters of that carnage - some 5.5 million job losses - were borne by food services and drinking places.

Employment in professional and businesses services, and retail trade each fell by 2.1 million.

Some 1.3 million manufacturing workers lost their jobs in April, with nearly two-thirds of that total coming from personal and laundry services.

Job losses in construction were just shy of one million last month.

The average work week for all employees ticked up slightly in April to 34.2 hours, but Bureau of Labor Statistics commissioner William W Beach urged caution when interpreting that data, noting in a statement that "the majority of the increase in average weekly hours reflects the disproportionate number of workers with shorter work weeks who went off payrolls."

Beach also urged caution when interpreting the $1.34 rise in average hourly earnings because it reflects the disproportionate loss of low-wage jobs.

Details
By Salt Media
May.09