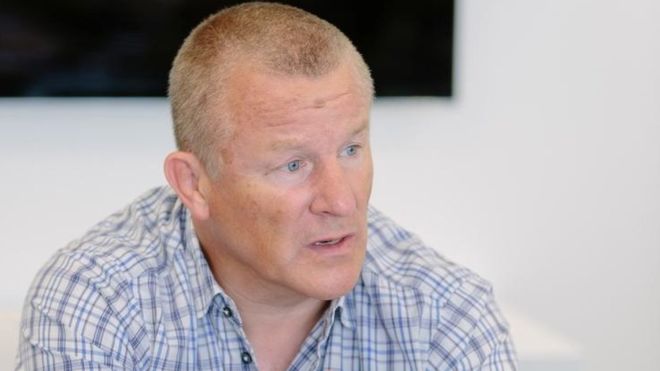 Neil Woodford's flagship fund to be shut down

Neil Woodford's flagship fund is to be shut down, in a major humiliation for the UK's best-known stockpicker.

Mr Woodford has also been removed as investment manager of the fund, which will be renamed.

He has criticised the decision made by the fund's administrators, claiming it is not in the long-term interests of investors.

Those investors will not get any money back until mid-January at the earliest owing to financial rules.

Withdrawals from the Woodford Equity Income Fund have been frozen since early June, after rising numbers of investors asked for their money to be returned.

There has been criticism that, in the meantime, Mr Woodford continued to charge management fees to customers.

What is the Woodford fund?

A stockpicker - or fund manager - analyses the potential of different stocks to try to decide whether or not they will make a good investment. Mr Woodford is unusual in that he is as close to a household name as is possible in the world of investing.

Investors, ranging from big institutions such as pension funds to ordinary people with some cash set aside, put money into his UK Equity Fund. At its peak, the fund had more than £10bn of people's money in it.

However, the performance of the fund was hit, followed by an exodus of investors - with the fund's current value now £3.1bn. In June, Link Fund Solutions, which runs the fund on Mr Woodford's behalf, decided to freeze the fund. That meant investors' money was locked in for months.

Now Link has said: "After careful consideration, the decision has now been taken not to reopen the fund and instead to wind it up as soon as practicable. This is with a view to returning cash to investors at the earliest opportunity."

It said attempts to sell off Mr Woodford's investments in unlisted businesses had "not been sufficient to allow reasonable certainty" for when the fund would reopen.

The winding-up is expected to begin on 17 January next year, because rules state that there must be a notice period of at least three months. This is Mr Woodford's flagship, but not only, fund.

How much will investors get back?

That is impossible to tell at the moment. The amount depends on how much is raised from the sale of the fund's assets, but most investors will probably get far less than they had once hoped.

The initial payment is expected at the end of January, but it could be some time before the process is completed.

In a letter to investors, Link said assets "will continue to be sold over time in an orderly manner".

"It is not currently possible to predict when the orderly sale of these remaining assets will be fully complete and when the remaining capital distributions will be paid to you and the other investors," the letter added.

What does Mr Woodford and investors think of the decision?

Mr Woodford. who made his name in 25 years of market-beating returns with Invesco Perpetual, clearly disagreed with the move to close the fund.

"This was Link's decision and one I cannot accept, nor believe is in the long-term interests of LF Woodford Equity Income fund investors," he said.

But some investors say it was an inevitable decision, given the continuing difficulties at the fund which will now be renamed LF Equity Income Fund.

Gus Harris-Reid, 33, who has about £6,000 stuck in the suspended fund, said: "I am not entirely surprised that this has happened. It is a lesson [to investors] not to put all your eggs in one basket. This could happen to anyone at any time.

"His biggest mistake was that he did not communicate how the fund had changed to a [riskier] strategy."

Claire Jebson and her husband had some of their money locked up in the Woodford fund, which was supposed to be used to help pay for son Sam's university education.

"We were going to sell as soon as we could and take the losses, but I know other people would have hung on thinking it would turn around," she said.

"Closing it is fair to everyone. It is time to draw a veil over it."

What has been the wider reaction?

The Financial Conduct Authority - the City watchdog - said it welcomed "the removal of uncertainty" that Link's decision provided.

"We recognise that investors have been concerned about the state of their investment since the beginning of June," the FCA said.

"Winding up the fund will allow the return of money to investors through a number of distributions, likely to begin in January 2020. This means investors should receive some of their money back sooner than had the fund remained suspended for a longer period."

However, commentators have questioned whether there is any good news, other than certainty, for investors.

"The decision to close the fund is just one of several possible bad outcomes," said Patrick Connolly, from financial advisers Chase de Vere.

He said investors should prepare themselves for the possibility of bigger financial losses as a fire sale of the Woodford fund's assets takes place.

However, even if the fund had reopened in the future, the investment performance and negative publicity would have meant more investors leaving and very little left in the fund, he said.

Darius McDermott, managing director of Chelsea Financial Services, said: "More clarity from Link is required and the regulator needs to be on the ball today, this week, this month, to make sure that investors don't get hurt any more than they have already.

"This action also makes Woodford a forced seller of all stocks - stocks that the market place and short-sellers are all aware of. It may well mean that less money is returned to investors, so the jury is still out on this one."

Were you an investor in Neil Woodford's fund? How are you affected by today's news? Please get in touch by emailing This email address is being protected from spambots. You need JavaScript enabled to view it..

Please include a contact number if you are willing to speak to a BBC journalist. You can also contact us in the following ways: