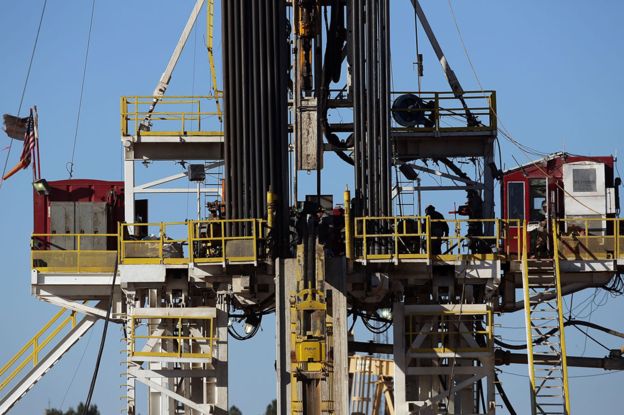 How did oil price become so important?

It was 27 August 1859, and a crucial message had been sent. Entrepreneur Edwin Drake's last financial backer had finally lost patience. Pay off your debts, give up and come home, the message read.

Drake had been hoping to find "rock oil", a brownish unrefined "crude" oil that sometimes bubbled near the surface of western Pennsylvania. He planned to refine it into kerosene, for lamps - a substitute for increasingly expensive whale oil.

There would also be less useful by-products, such as gasoline, but if he couldn't find a buyer for that he could always pour it away.

The message had been sent, but Drake had not yet received it when his drill bit punctured an underground reservoir full of crude oil under pressure. From 69 ft (21m) beneath the surface, the oil began to rise.

The whales had been saved, and the world was about to change.

Just a few miles south and a few years later, came a hint of what lay in store.

When oil was struck at Pithole, Pennsylvania, in 1864, "there were not 50 inhabitants within half a dozen miles", according to the New York Times.

A year later, Pithole had at least 10,000 inhabitants, 50 hotels, one of the country's busiest post offices, two telegraph stations and dozens of brothels.

A few men made fortunes, but a real economy is complex and self-sustaining. Pithole was neither, and within another year, it was gone.

Its oil boom did not last, but our thirst for the fuel grew and grew. The modern economy is drenched in oil.

It's the source of more than a third of the world's energy.

That's more than coal, and more than twice as much as nuclear, hydroelectric and renewable energy sources combined.

Oil and gas together provide a quarter of our electricity, and the raw material for most plastics.

Edwin Drake may have questioned who would buy gasoline, but the internal combustion engine was about to give him an answer. From cars to trucks, cargo ships to jet planes, oil-derived fuel still moves us - and stuff - around.

No wonder the price of oil is arguably the most important single price in the world.

In 1973, when some Arab states declared an embargo on sales to several rich nations, prices surged from $3 to $12 a barrel in just six months.

It led to a global slowdown, with US recessions following subsequent price spikes in 1978, 1990, and 2001. Some economists even believe that record high oil prices played an important role in the global recession of 2008, which is conventionally blamed on the banking crisis alone.

As oil goes, so goes the economy.

So why did we become so excruciatingly dependent on the stuff?

Daniel Yergin's magisterial history of oil, The Prize, begins with a dilemma for Winston Churchill.

Churchill was made head of the Royal Navy in 1911.

One of his first decisions was whether the British Empire would meet the challenge of an expansionist Germany with new battleships powered by safe, secure Welsh coal, or by oil from faraway Persia - modern-day Iran.

Why would anyone rely on such an insecure source? Because oil-fired battleships would accelerate more quickly and sustain a higher speed, required fewer men to deal with the fuel and would have more capacity for guns and ammunition.

Oil was simply a better fuel than coal.

Churchill's "fateful plunge" in April 1912 reflected the same logic that has governed our dependence on oil - and shaped global politics - ever since.

After Churchill's decision, the British Treasury bought a majority stake in the Anglo-Persian oil company - the ancestor of BP.

In 1951, it was nationalised by the government of Iran. Our company, protested the British. Our oil, responded the Iranians. The argument would be repeated around the world over the subsequent decades.

Some countries did well. Saudi Arabia is one of the richest on the planet, thanks to its large oil reserves.

Its state-owned oil company, ASaudi Aramco, is worth more than Apple or Google or Amazon.

Still, nobody would mistake Saudi Arabia for a complex, sophisticated economy such as that of Japan or Germany. It's perhaps a bit more like Pithole on a grander scale.

Elsewhere, from Iraq to Iran, Venezuela to Nigeria, few oil-rich countries have prospered from the discovery. Economists call it the "curse of oil".

More things that made the modern economy:

Why is it a problem to have lots of oil?

Exporting it pushes up the value of your currency - which can make everything other than oil prohibitively expensive to produce at home.

That means it can be hard to develop manufacturing or complex service industries.

Historically, many politicians have tried to monopolise their country's oil for themselves and their allies. Dictatorships are not uncommon. There is money - for some - but such economies tend to be thin and brittle.

That's one reason we might hope for something to replace oil. Climate change, obviously, is another.

But oil has so far stubbornly resisted giving way to batteries. This is because machines that move around need to carry their own source of power with them - the lighter the better.

A kilogram of petrol stores as much energy as 60kg of batteries, and has the convenient property of disappearing after use. Empty batteries, alas, are just as heavy as full ones.

Electric cars are finally starting to break through. Electric jumbo jets are a tougher challenge.

There was a time when it seemed as though oil might simply start to run out - "peak oil" was the phrase - pushing prices ever higher, and giving us the impetus to move to a clean, renewable economy.

In fact, oil is being discovered far more quickly than it is being consumed.