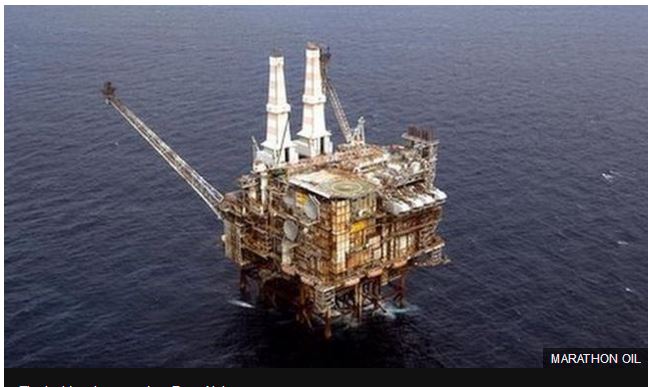 An oil firm has been fined more than £1m - one of the biggest ever fines in a case of its type - over a North Sea gas leak.

The company admitted Offshore Installations (Prevention of Fire and Explosion, and Emergency Response) and Health and Safety at Work Act breaches.

No-one was injured in the incident.

Most of the 100 personnel on the platform had been gathered in the accommodation block, ahead of their Boxing Day meal, so they were not near the leak.

Pipework ruptured, allowing more than two tonnes of high-pressure methane gas to be released, causing what was described as significant damage.

The Health and Safety Executive (HSE) said Marathon Oil had failed to undertake any suitable and sufficient inspection of the pipework that would have allowed the company to identify the risk and prevent the hazard.

HSE inspector Ahmedur Rezwan, said: "This incident is a further reminder of the ever-present hazards in oil and gas production, that if not rigorously managed can easily result in a potentially life-threatening event.

"During any normal period of operations personnel could easily have been working in, or transiting through Module 14, and they would almost certainly have been killed or suffered serious injury.

"The timing of the incident and fact that the gas did not ignite was fortuitous."

Marathon said in a statement: "Marathon Oil confirms that the company has been fined in a case relating to a gas release which occurred on the Brae Alpha platform on 26 December 2015.

"The company has fully co-operated with the HSE and complied with the measures suggested in the improvement notice.

"The safety of our personnel is a top priority, and we've taken action to resolve issues relating to this incident."